The battles between politicians and the media have not just been confined to press conferences, radio and television studios. Over the decades we have taken on the pollies in various sports including Australian football, soccer, basketball, Rugby Union, netball, touch football, swimming and cricket. Many of these often annual match ups have been held without independent umpires and referees, leading to a few very dodgy calls. 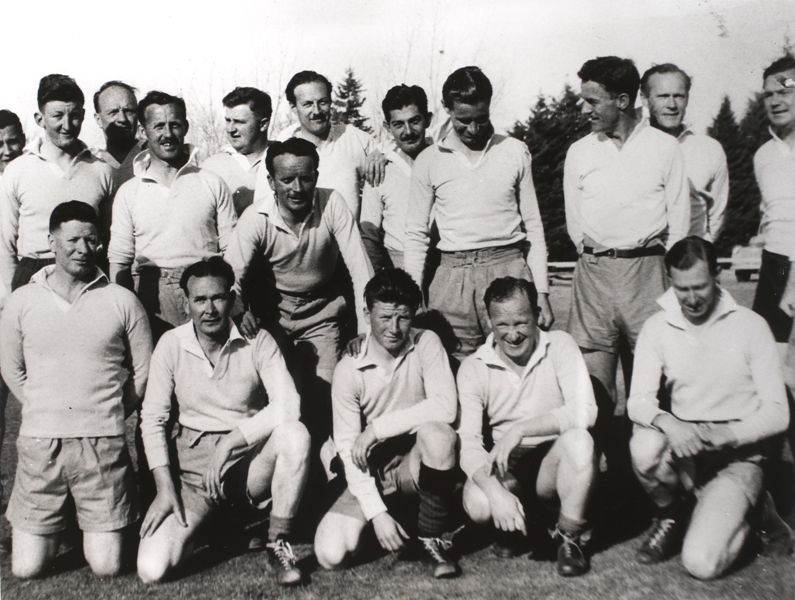 The annual swim race has been held in the Parliament House gym for around a decade. The race is over 500 metres with swimmers completing two 25m laps (or more if their team is short of numbers). The Press Gallery is particularly proud of its record against the politicians having their name on the trophy many times. We even won in 2011.

The race was looking like an embarrassment for the pollies with the media leading by a country mile when journalist Andrew Greene hit the water for the anchor leg. Not having trained at the Australian Institute of Sport, Greene quickly discovered that his togs were not keeping pace with his backside. Perhaps his technique was to moon the opposing swimmer (who was rapidly closing the gap without the drag of a misbehaving board shorts drawstring). Greene finally managed to keep his manhood covered with one hand while touching the wall a fingernail in front of the politician’s team.

The last race was held in March 2015, Andrew Greene swam again (this time with his dacks on for the whole race) and the following is his report.

They are not usually known for their athletic prowess, and today federal politicians and press gallery journalists reminded everyone why it is best they are not often seen in their speedos.

This year’s renewal of the annual parliamentary swimming contest was marred by a series of ugly bellyflops, but in the end the journalists comfortably prevailed.

ABC political editor Chris Uhlmann came out of 40 years of retirement to take part in the spectacle.

“In fact, when I joined the swimming team at Marist in 1972, Billy McMahon used to swim up and down the outside lanes.”

“I’m very pleased that we’ve been able to defend the title today … it’s been a fantastic competition,” she said.

“Congratulations to everyone here. There’ll be no copayment to participate in next year’s event.”

Labor MP Jenny Macklin suggested the competition rules might need to be revisited next year, given the dominant performance by reporters.

“I think we need a penalty for the press,” she said. 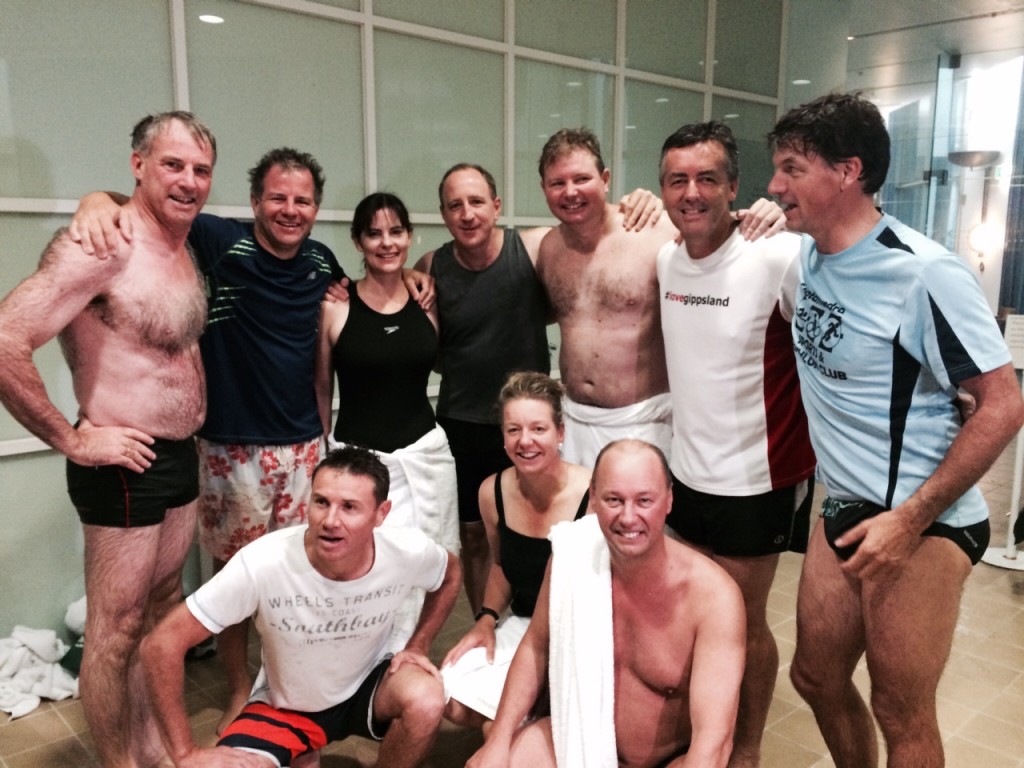 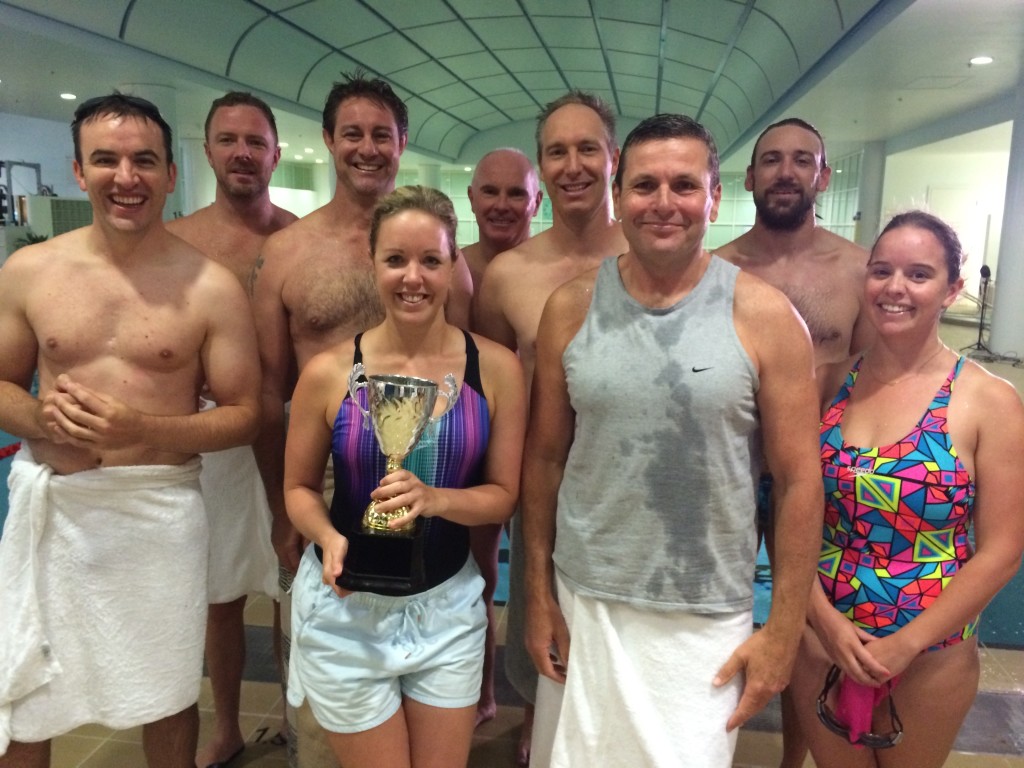 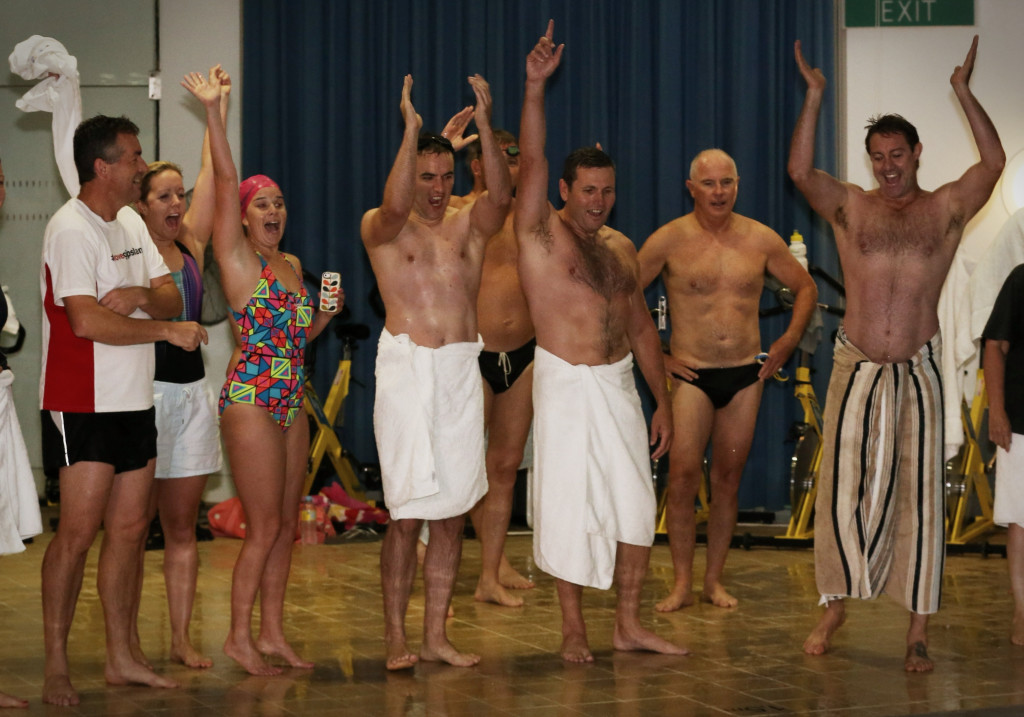 The Press Gallery celebrate their victory in the swim race competition between Government, Opposition and the Press Gallery at Parliament House on Tuesday 3 March 2015. Photo: Andrew Meares

Cricket has been a fixture on the pollies v Press Gallery calendar for many years with perhaps the most famous match being held in 1984.

It’s rare to have a senior minister brave enough to pad up and face the media, rarer still for a PM to stand at the crease, so when Bob Hawke was batting the day before the 1984 election campaign, the cameras were there to cover the event. It’s a day former Melbourne Herald Political Correspondent Gary O’Neill won’t ever forget.

Bob Hawke was a good batsman, aggressive and a front foot player. He had actually played cricket for Oxford in his university days. That fateful day (October 14, 1984), I had bowled a couple that he had played defensively but you could tell he wanted to get on with it. He was already on 28 runs. The next ball was going over the backward square leg boundary no matter what I bowled him! I dropped the ball a little short of a good length and it rose up but only just above waist height. He took a huge swing and top-edged it up into his glasses which instantly shattered and his head rocked back – no helmets in those days. Blood was streaming from a gash near his eye and I thought “Bloody hell, what have I done!”

Players rushed to him and I think it was Geoff Kitney who actually plucked a sliver of glass form the Prime Ministerial eye! Hawkie went off to hospital but in typical style, he was back in an hour or so, into the budgie smugglers and watching the rest of the play whilst working on his suntan from a banana lounge.

My son Tom, who was about five or six years old at the time, was later swinging a bat with a couple of other kids nearby when Hawke yelled out good-naturedly – “Get that kid out of here – his old man already tried to kill me!”

The next day – the start of the 1984 campaign – the traveling media circus set off with a one-eyed Prime Minister for a ‘media event’ on two of the RAN’s new frigates in sea trials off Jervis Bay. Hawke got his own back when he insisted I was the one to be ‘transferred’ at sea on a flying fox rigged up between the two ships under full steam.

This will go down as one the best game in decades. It had tension, drama and … controversy.

After winning the toss, Richard Colbeck, captain of the Pollies, oped to bat.

It didn’t start well for the Pollies. A remarkable piece of fielding by Jackson Gothe-Snape at point saw Bruce Billson run out through a direct hit from about 25m. Wickets quickly started to tumble. Sam Watson went cheaply and then Richard Di Natale was cruelly given out LBW. The Greens senator was not happy, perhaps justifiably. The tense atmosphere surrounding this decision saw Press Gallery captain Andrew Probyn later decide to withdraw a successful LBW shout against Richard Briedis.
Terrific bowling from James Glenday (2-15) and Gareth Hutchens (2-18), aided by Matt Moran (2-11) saw the Pollies restricted to 11-150 from their 35 overs.

It wasn’t a high total to defend but the Pollies bowled well. Di Natale was a stand-out (3-29) with superb left arm seamers that caused trouble for the batsmen. One of his victims was Kieran Gilbert whose 23-run innings had some trademark legside flicks and straight drives. When the Press Gallery was 7-69, the Pollies started to sense they might be in reach of their first victory since 2005.

Then came a defining partnership between Glenday and Matt Roberts. It was a 78-run masterclass in run chasing, with bludgeoned sixes and fours, great running and cheeky singles. When Glenday retired with a cracking six, the Press Gallery was within a dozen runs of victory. The innings was brought to a close with a huge six by Shaun Kingma.

It was a thrilling win for the Press Gallery but a heartbreaker for the Pollies. 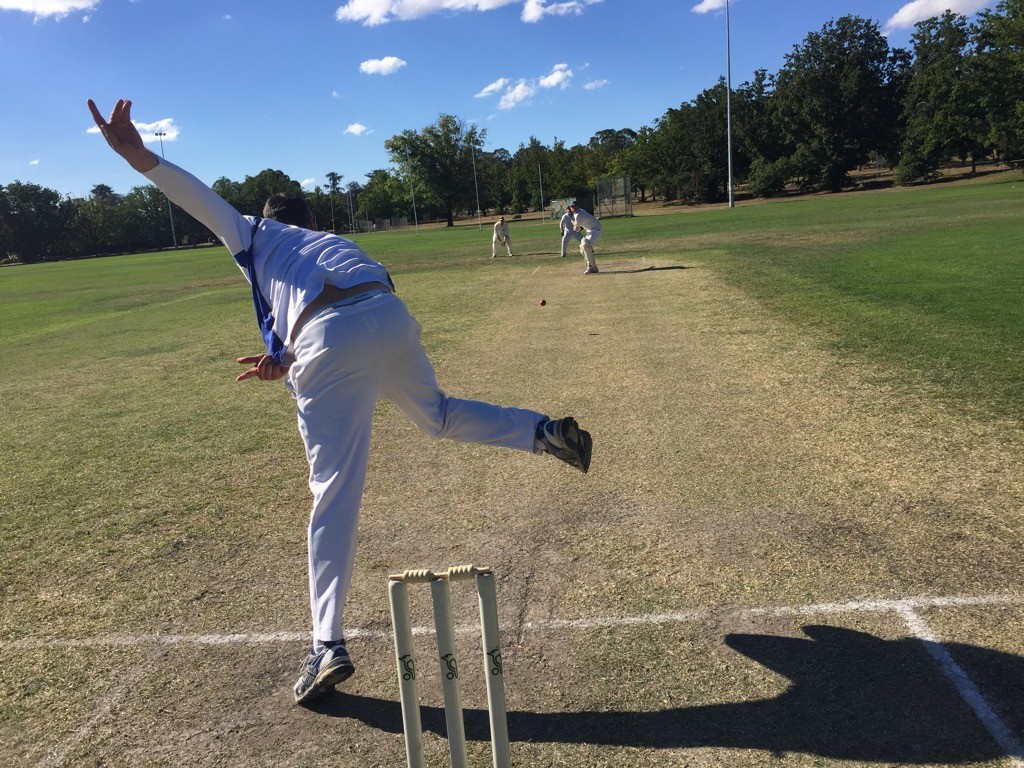 Robert Graziani (Senator Cormann’s office) bowls to ABC’s James Glenday; Glenday hit a six on this ball. Photo: James Massola (who was umpiring at the time). 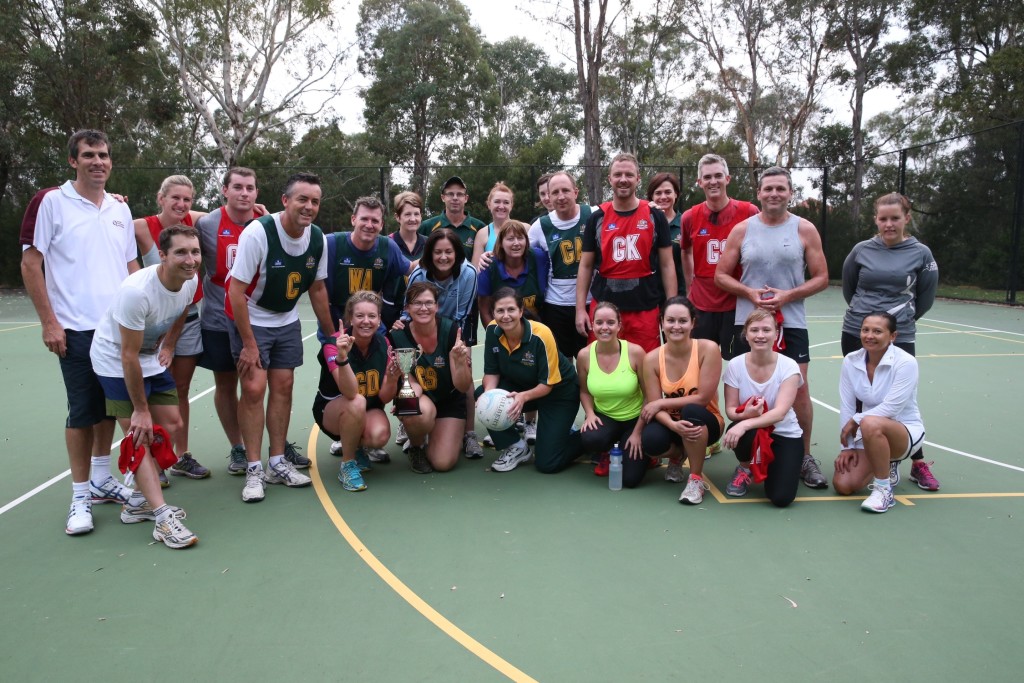 The combined teams at the annual Politicians vs Press Gallery netball match in Parliament House in Canberra, Wednesday 4th March 2015. The Pollies won the match a lot of points to 1 (we lost count after the pollies got about 20). Photo: Mike Bowers for The Guardian Australia

The world game has never looked so good, even if the final result was a bit one-sided.

The Pollies v Press soccer game had many highlights, some more glorious than others.

Stephen “What a Gob” Conroy slotted the first goal for the Pollies in rather controversial circumstances.

To some, the ball appeared to have ricocheted off the goalpost, but the Pollies were insistent it was clean. Hmmmm.
Another goal followed five minutes later. The scorer was Scott “Tiny” Higgins, senior adviser for PUP Senator Glenn Lazarus.
More a man mountain than his boss, Higgins scored a hat-trick in the Pollies’ 5-1 win. No stranger to the field, Higgins has played for Brisbane Roar, the defunct Gold Coast United and played professionally in Israel and Scotland. His career highlight was playing for Falkirk against boyhood idols Celtic at Celtic Park before 80,000.
(Higgins’ starring role, reminded some of the Press Gallery veterans the time when Coalition Cricket XI called up Queensland quick Joe Dawes in 2001, claiming he was a “staffer” for Peter Dutton).

The Press team had some standouts. Tory “Studs Up” Shepherd’s sliding tackles were courageous, if not crazy-brave.

“Action” Jackson Gothe-Snape showed silky skills, Marija “Shake It Off” Jovanovic was a tirelessly persistent defender and Tom “Iggy” Iggulden/Shaun “The Sheep” Kingma offered some nifty glovework to keep the Press Gallery in the game.

James “Slip ‘n Slide” Massola put in some brutal tackling, Anna “The Fox” Henderson hassled and heckled like she was on duty at the doors, Andrew “Mr T” Tillett crunched opponents and Achim “The Man” Bormann and Luke “Steam Engine” Stevenson seemed everywhere.

Andrew “Goalhanger” Probyn scored with a speculative shot from outside the box.

The Pollies’ goalie Bert van Manen, aka the “Flying Dutchman”, offered extraordinary resistance, with some cracking saves.
Glenn “More Brick than Eyes” Lazarus offered thunderous bounce to the Pollies’ defence, Dan “Terror” Tehan ran like a whippet, Graham “Pesky” Perrett was a study in brinkmanship and Alan “Numbers” Griffin scuffed and scoffed his way to glory.
Next year, this game will be the Gallery’s. 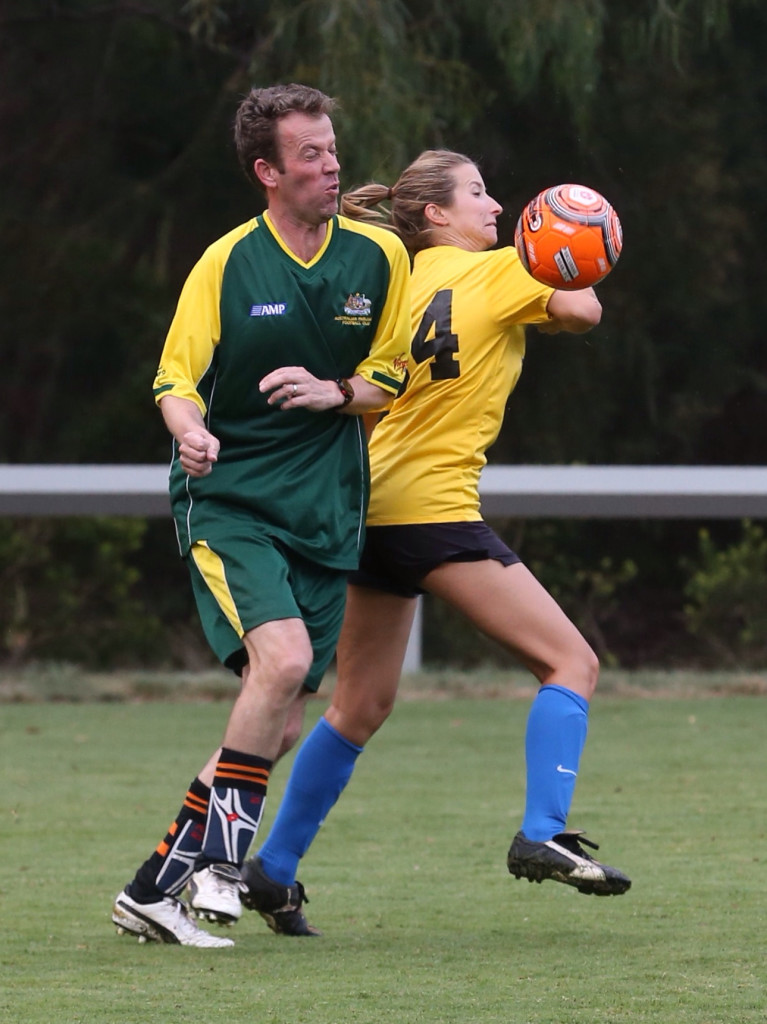 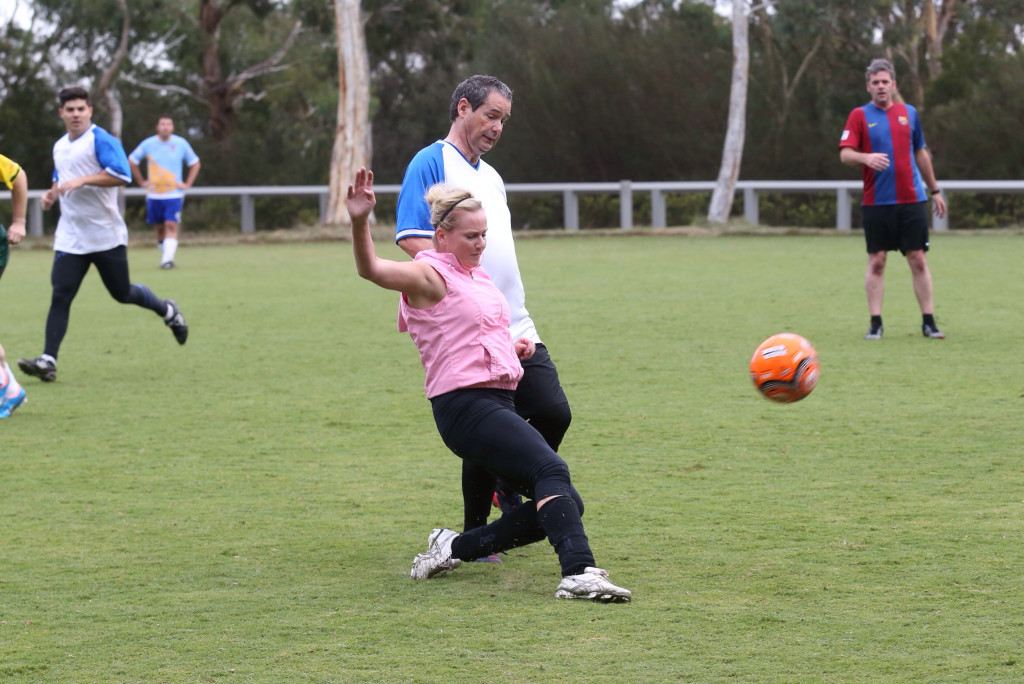